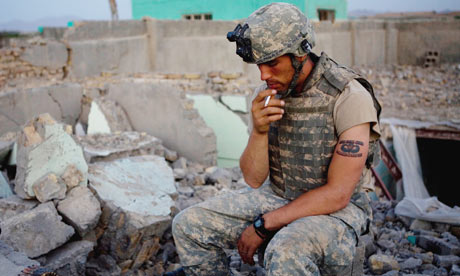 The war in Afghanistan claimed the lives of tens of thousands of Afghan civilians and about 3,500 foreign troops

Dec. 28, 2014 – With little fanfare, the United States and NATO formally ended the longest war in U.S. history with a ceremony in Kabul, Afghanistan on Sunday, leaving observers to wonder what—if anything—was achieved.

Over 13 years, U.S.-led war in Afghanistan claimed the lives of about 3,500 foreign troops (at least 2,224 of them American soldiers) and an estimated 21,000 Afghan civilians; most experts agree that the country is as violent as ever and that the death toll will continue to rise. Many say the war is over in name only.

"Afghanistan’s war is as hot as it has been since the U.S.-led invasion following the 9/11 attacks overthrew the Taliban," Lynne O’Donnell writes for the Associated Press. Some 5,000 members of Afghanistan’s security forces—army, police and armed rural defense units—have died this year fighting the Taliban, according to Karl Ake Roghe, the outgoing head of EUPOL, the European Union Police Mission in Afghanistan.

And while the ceremony marked the end of the U.S.-led International Security Assistance Force (ISAF), a new flag for the international mission "Resolute Support" was immediately unfurled.

In late September, the U.S. and Afghanistan signed a controversial Bilateral Security Agreement that allows for U.S. training, funding, and arming of the Afghan military; establishes long-term U.S. military presence in Afghanistan with access to numerous bases and installations in the country; and extends immunity to U.S. service members under Afghan law.

Stars and Stripes set the scene in Kabul: "During an hour-long ceremony in a drab gymnasium at the headquarters of the military coalition that has battled against insurgents for 13 years, generals hailed the end of a mission, while struggling to explain the parameters of what will still be a substantial military operation in Afghanistan."

There will still be roughly 11,000 American troops in Afghanistan next year as part of the Resolute Support mission to train, advise and assist Afghanistan’s roughly 350,000 security forces. ISAF spokesman Lt. Col. Christopher Belcher told Stars and Stripes that there would be a total of roughly 17,500 foreign troops in Afghanistan next year, which the publication notes is "far more than the 12,000-13,000 U.S. and NATO officials have been saying would be part of Resolute Support. Belcher could not say where those additional troops would be coming from nor when or why the decision was made to increase their number."

END_OF_DOCUMENT_TOKEN_TO_BE_REPLACED

By Rebecca Gordon
TomDispatch via Portside

DEc 18, 2014 – It’s the political story of the week in Washington. At long last, after the endless stalling and foot-shuffling, the arguments about redaction and CIA computer hacking [1], the claims [2] that its release might stoke others out there in the Muslim world to violence and "throw [3] the C.I.A. to the wolves," the report — you know which one — is out.  Or at least, the redacted executive summary of it is available to be read and, as Senator Mark Udall said before its release, "When this report is declassified, people will abhor what they read. They’re gonna be disgusted. They’re gonna be appalled. They’re gonna be shocked at what we did."

So now we can finally consider [4] the partial release of the long-awaited report from the Senate Select Committee on Intelligence about the gruesome CIA interrogation methods used during the Bush administration’s "Global War on Terror." But here’s one important thing to keep in mind: this report addresses only the past practices of a single agency. Its narrow focus encourages us to believe that, whatever the CIA may have once done, that whole sorry torture chapter is now behind us.

In other words, the moment we get to read it, it’s already time to turn the page. So be shocked, be disgusted, be appalled, but don’t be fooled. The Senate torture report, so many years and obstacles in the making, should only be the starting point for a discussion, not the final word on U.S. torture. Here’s why.

Mainstream coverage of U.S. torture in general, and of this new report in particular, rests on three false assumptions:

1. The most important question is whether torture "worked."

3. The only kind of torture that really "counts" happens in foreign war zones.

Let’s look at each of these in order.

False Assumption #1: The only question is "Did it work?"

Maybe torture "worked" on occasion. Probably it didn’t. But it doesn’t matter because torture is illegal under U.S. and international law, and it’s a moral abomination.

The Senate report’s first finding — and the one that much of a highly predictable debate will focus on — is that the CIA’s "enhanced interrogation techniques" were "ineffective" in identifying the perpetrators of 9/11, producing actionable intelligence, or preventing terrorist attacks. In response, the rhetoric is already flying. The Republicans (except for Senator John McCain [5]) are jumping up and down shouting [6] "It did work! It did!" The president’s own CIA director, John Brennan, has issued his denunciation of the report. While acknowledging [7] that "the Agency made mistakes," he, too, insisted that torture "worked." (A couple of days later, he backtracked, suggesting instead that the answer to this question was actually "unknowable [8].") Other former officials of the Agency are chiming in [9] big time.

END_OF_DOCUMENT_TOKEN_TO_BE_REPLACED Instead Kerry proposed the appearance of an authorization before stripping the idea of real public and congressional accountability. Members of Congress should look carefully at this insult to their constitutional role.

First, Kerry said it was "crystal clear" that the President wants no US troops in combat operations on the ground, but that Congress should not, "preemptively bind the hands of the commander-in-chief to react to changing circumstances."

Second, Kerry said he doesn’t want an open-ended timeline for war but that the authorization should run for three years or longer, safely after the 2016 elections.

Third, Kerry promised no wider war beyond Iraq and Syria, but doesn’t want any constraint on US going after ISIS militarily in other nations.

This is nothing but an attempt to avoid an embarrassing battlefield defeat during the next two years before handing over the mission of derailing ISIS to the next president. At the same time, it will limit the ability of Congress to question the policy once they have signed on. This is how escalation works.