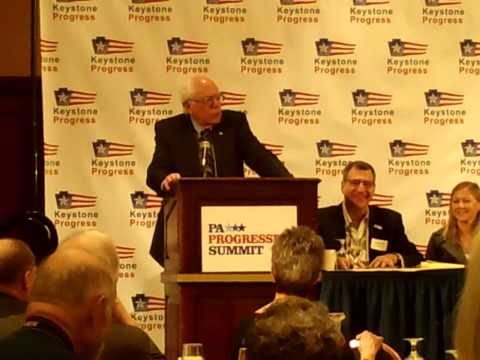 Feb 8, 2015, Harrisburg, PA. If the vote were taken for the Democratic presidential candidate at the Harrisburg Hilton on Saturday, Feb. 7, Senator Bernie Sanders, Independent of Vermont, would likely have won by a landslide.

That was the spirit in the hotel ballroom as Sanders addressed the 800 people gathered for the PA Progressive Summit. The annual meeting, sponsored by Keystone Progress, brought together progressive activists—community and trade union organizers, women’s right and civil rights groups, hopeful candidates and door knockers—all of whom made up the democratic wing of the Democratic Party, from all across the Keystone State.

“I’m going to try something a little different this morning,” said Sanders to start things rolling, “I’m going to tell you the truth.” He got a wave of laughter and cheers from people who often got something else from politicians.

Sanders started off with the ‘Citizen United’ Supreme Court decision taking limits off the superrich in funding elections and candidates. “It will go down is history as one of the worse ever made in modern times” Sanders said by way of description. “By a five-to-four vote, it undermined the very foundations of democracy. I know you think the situation is bad, believe me, it’s worse than you think it is.” Billionaires are not satisfied with owning the economy, he explained. They were buying government as well.”

The Koch Brothers, with 85 billion in wealth, were taken as the case in point. Sanders explained that they alone intended to spend over 900 million dollars on the 2016 election—more than the combined total of Obama and Romney in 2012. This meant these “counter-revolutionaries with a far right agenda” would wield more power than both political parties in the recent past.

Turning to the economy, Sanders said while the economy was clearly in better shape than when Obama, first took office, it was still clearly in bad shape. He explained the different meanings of official unemployment figures, with 5.8 percent being the most common number cited, but double that, near 12%, was more accurate.

For those worried about deficits, Sanders noted that they had been reduced under Obama. But he also insisted that if they were truly concerned about deficits, they would have stood up against the Iraq war. This remark got wild cheers and everyone out of their seats.

Sanders went on to examine ‘the explosion in technology,’ not only i-Phones and i-Pads, but robotics in factories. “All of this has led to a tremendous growth in productivity on the part of American workers.” Such changes logically might suggest workers were paid more or worked shorter hours, he added, “but all of you know, tens of millions of Americans today are working longer hours for less pay.”

This meant anger and stress among workers—impacting both men and women, even if in slightly different ways—needed discussion as a national issue. There was a time, “ancient history” said Sanders, when one worker could work 40 hours and support a family reasonably well. Now women were working along with men, sometimes at two or three jobs, at long hours and low pay, to hobble together enough to support a family. “This causes a lot of anger, and often it’s being angry at the wrong people for the wrong reasons,” he added. “The average male worker, right in the center of the economy, now makes $800 a year less in inflation adjusted dollars than he did 40 years ago. The average female worker in the center makes $1300 a year, even less. They have a lot to be angry about. They want to know why, and our job is to explain it to them.” (Continued)

Outrageous Inequality as a Key Issue

Sanders then asked the crowd to look at another side of today’s reality: “The people at the top have never had it so good, and corporate profits are at an all time high. Today we have more inequality than at any time since 1929, and you all know what happened then. Today, the top one tenth of one percent holds more wealth than the bottom 90 percent. The Waltons of Wal-Mart, one family alone, owns more wealth than the bottom 40 percent. And since the crash of 2008, 99% of all the new income generated has gone to the top 1%.”

“Do we want to be a nation where so few have so much while so many have so little?” That was the “moral dynamic” with which Sanders said the crowd there as well as the country had to come to terms. Otherwise, the country would remain in the hands of the “criminal bankers” on Wall St would had a never-ending addiction to unbounded wealth. ‘You would think $85 billion would be enough, but with these guys, there’s never enough.”

Why an economic issue? “My Republican colleagues,” Sanders stated, “like to go on about how the wealthy are ‘job creators.’ Well they are dead wrong. You are the job creators, the working families of American are the job creators.’ Why? Because increased consumer demand, rooted in families having more income to spend of things they need to survive and live a decent life, he explained, are what compels businesses to hire more workers—and when the income of hundred of millions of workers shrinks, the jobs will too.

Why a political issue? Sanders returned again to the Koch brothers. “What do they want?” he asked, and answered by reflecting on a major political change of the past 40 years. “The Republican party has changed from being a right-center party to being a rightwing extremist party.” Likewise, he explained, the Democrats have shifted from a center-left party, including a large role for labor, to more of a centrist party. “Both have shifted to the right.”

From Center-Right to Far Right

But back to the Koch’s. “In 1980, David Koch ran for Vice-President on the Libertarian Party and got only one percent of the vote on the platform that was “kind of kooky, kind of fringy, kind of crazy. And the frightening thing now is what was considered crazy back then is now the main stream of the GOP”.

Koch’s platform in 1980, Sanders explained, started with abolishing campaign spending laws and the ‘despotic’ FEC, and went of to call for the abolition of Medicaid, Medicare, Social Security, the US Postal Services, and the repeal of minimum wage laws and welfare programs. “When they talk about freedom, they want to repeal all legislation and programs over the last 80 years then have benefited working people, and the elderly, the children, the sick and the poor.”

They haven’t changed in 40 years, Sanders concluded. “Every day in Washington DC, we see their dream, their vision of America, come closer and closer to reality. “They want a situation where we have no rights to anything, and we are simply dependent on their good wishes. The rich own it all.”

In order to defeat the GOP agenda, Sanders ended his speech with a brief summary of a progressive agenda, noting that point by point, a majority of Americans were in agreement, even if they were voting in conflicted ways.

His cornerstone was his own new bill calling for $1 Trillion for investment in new infrastructure and to replace crumbling infrastructure. There were 13 million new well-paying jobs to be created in building bridges, highways, ports, high speed rail and renewable energy.

“We also have to raise minimum wage to a living wage,” he declared, along with insisting on pay equity, opposing unfair trade deals, making college affordable if not free, break up the ‘huge institutions’ on Wall St , and last but not least, a single payer health care system that covered everyone.

The key organizers for Sanders appearance in Harrisburg were the Progressive Democrats of America, especially its 12 CD chapter in Western PA. They organized a morning fundraising breakfast where Sanders also spoke, attended by more than 150 people and raising over $10,000 on the spot.

“We need progressives like Sanders, who support working families, running for President, for Senate, and for Congress wherever possible,” said Randy Shannon, convener of the Sanders for President PA Exploratory Committee. “A Democratic victory in 2016 with a bigger progressive caucus can tax Wall Street, end austerity and discrimination, and put the nation to work building the solar infrastructure we desperately need.”

PDA also ran a table, with a dozen volunteers, that set as its aim recruiting people from all across the state to sign up to form Sanders campaign committees in their areas, and they were quite successful in doing so.

“I would love to be able to take Bernie’s 12 Point Plan for an Economic Recovery door-to-door in the primary election,” concluded Tina Shannon, president of the 12th CD’s Progressive Democrats of America. “It’s just what people are looking for.”

[Inquiries can be sent to the Sanders for President PA Exploratory Committee, PO Box 31, Ambridge, PA 15003.]