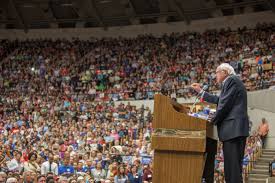 July 4, 2015 – CNN dubbed this “the summer of Sanders [3]” as media outlets finally picked up on the large crowds Independent Vermont Senator Bernie Sanders has attracted during campaign stops. His rocketing poll numbers in early primary states like Iowa and New Hampshire led to countless stories heralding a Sanders surge — but the story is as much about the issues as it is about the man.

Even Republican candidates have taken notice of Sanders’ rise. Ahead of a recent stop in Madison, Wisconsin, likely 2016 contender and Wisconsin Governor Scott Walker welcomed Sanders to the state with a series of tweets [4] attacking the democratic socialist once dismissed as too fringe. Walker may not have taken too fondly to Sanders attracting a record 10,000 people in his home state.

But Sanders’ campaign, surely more so than that of any of the Republican candidates, seems to be gaining traction more for the ideas he espouses than because of a cult of personality.

Granted, many supporters have pointed to Sanders’ straightforward manner and willingness to call out bad actors as refreshingly appealing, but unlike with Republican presidential candidates Donald Trump and Chris Christie, it isn’t just a brash style that’s being sold. Sanders makes a direct effort to address many of the issues that have arisen since the Hope & Change campaign of 2008 and it appears as though he is tapping into very real and long-simmering sentiments in the Democratic base.

More than a protest vote against Hillary Clinton, as some have suggested, Sanders’ support appears to be support for issues Clinton’s yet to fully address. Here are some of the ways that Sanders is gaining support by leading on issues or movements that other candidates ignore:

Sanders was chairman of the Senate Veterans’ Affairs Committee when Democrats last controlled the chamber, and following the VA scandal, Sanders worked with Republicans in the House to pass legislation [5] that expands health care access for veterans and makes it easier to fire underperforming officials.

His record and work on veterans’ affairs issues has earned Sanders top awards from the Veterans of Foreign Wars, the American Legion and the Military Officers Association of America, and now it appears as though that recognition is translating to support for his campaign.

The Boston Globe writes [6] that Sanders’ “surge is partly fueled by veterans,” citing “entire Reddit threads [7] [that] are dedicated to how veterans can best pitch Sanders to other veterans” and “a Facebook page promoting Sanders to veterans.” As the Globe notes, in the early voting state of South Carolina veterans make up about 11 percent of the electorate.

The short-lived global protest movement suddenly shifted the national debate in the aftermath of the recession from talk of austerity to a focus on growing income inequality by introducing terms like the 1 Percent to national prominence in time for the 2012 campaign. But the Occupy Wall Street movement achieved no great legislative win, and after the encampments were broken down many of the grievances remained unacknowledged, let alone addressed.

Sanders’ 2016 campaign embodies much of the demands of the OWS movement. Speaking to the largest campaign crowd of this cycle [8] in Wisconsin this week, Sanders said, “The big money interests — Wall Street, corporate America, all of these guys — have so much power that no president can defeat them unless there is an organized grassroots movement making them an offer they can’t refuse.” For activists who organized, protested and camped out in Zuccotti Park and squares across America, this message of unfinished business is powerful. The acknowledgement of a continued struggle and willingness to put up a fight is what was galvanized the Draft Warren movement and it has now seemingly shifted to Sanders.

Some Occupy Wall Street activists joined a movement against student debt, which has now surpassed $1 trillion in the U.S. The activists, some of whom had refused to make any more payments on their federal student loans [9], achieved a major victory this year when Corinthian colleges (you know them by their annoying commercials hawking their schools like Everest, Heald and WyoTech) shuttered the last of their remaining U.S. campuses, and the erasure of $13 million in debt. The movement has successfully overseen the closure of campuses in Canada the year before.

Sanders has proposed the College for All Act, [10] a plan to provide tuition-free education at public colleges funded by a small tax on Wall Street transactions. (Continued)

Since the 2010 Supreme Court ruling allowing unlimited political contributions by corporations and unions saw the rise of the Super PAC in electoral campaigns, Americans are shockingly united in their opposition to such obscene levels of money in politics. The overwhelming majority of Americans, including Republicans, [11] support limits on campaign contributions.

Sanders is the only candidate to have completely sworn off all Super PAC funds [12], although a couple of independent political action committees have formed in support of his candidacy.

But Sanders has objected to their existence, saying, “A major problem of our campaign finance system is that anybody can start a super PAC on behalf of anybody and can say anything. And this is what makes our current campaign finance situation totally absurd.”

The Supreme Court may have upheld the Affordable Care Act twice, but the political battle over the health care law promises to rage on five years after its passage. With health care costs rising only marginally more slowly than they before the law’s passage and a continuation of premium increases, even Democrats who support the law have called for marked improvements as millions of Americans are left uninsured because Republican lawmakers refuse to expand Medicaid.

Sanders has promised to return the debate to early 2007, when during the Democratic presidential primary the public option was on the table. Sanders has long called for a “Medicare-for-all” single-payer health care plan similar to what was tossed aside as too radical shortly after the talks began on health care reform once Obama took office.

Report typos and corrections to ‘corrections@alternet.org’. [13]