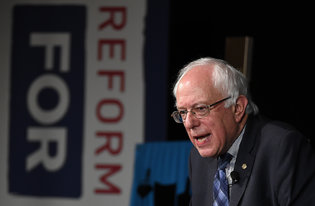 By THE NYT EDITORIAL BOARD

Senator Bernie Sanders released his immigration plan on Tuesday. To read it — and every citizen should — is to be yanked back in time, to an America that not so long ago was having a reasonable immigration discussion and a time when major reform had strong bipartisan support and a shot at becoming law.

But since the immigration reform bill was killed, in 2013, the party that killed it — the Republicans — has dragged the immigration debate to grotesque depths that go well beyond the usual nativist bigotry. Republican presidential candidates are arguing, in all seriousness, about sealing the border with fantastical 2,000-mile fences and weaponized drones; merging state, local and federal authorities and private prisons into one all-seeing immigration police state; forcibly registering American Muslims; mass-deporting 11 million Mexicans and others in a 21st century Trail of Tears; and turning away thousands of refugees fleeing war and terrorism in the Middle East.

Mr. Sanders, the Vermont senator seeking the Democratic presidential nomination, turns away from the insanity. His plan starts with the right premise: that immigrants should be welcomed and assimilated, not criminalized and exploited. His proposals seek to uphold American values, bolster the rule of law, bolster the economy and protect and honor families.

Recognizing Congress’s chronic inaction on immigration, Mr. Sanders promises to use executive authority well beyond what President Obama has done. He would protect young immigrants and their parents from deportation, and give “broad administrative relief” to young immigrants, to the parents of citizens and legal permanent residents and to others who would have been allowed to stay under the 2013 Senate bill. This affirms the humane and sensible principle behind that legislation — that 11 million unauthorized immigrants should stay and contribute, not be isolated and expelled. (Continued)

The Sanders plan tackles an ugly truth — that racial profiling and the nation’s vast deportation and detention machinery have made suspected criminals of millions of people who don’t fit the definition. His promise to “decouple” federal immigration enforcement from local policing would be a sharp break from dragnet policies that expanded under President Obama. Mr. Sanders rightly defends “sanctuary city” policies that protect public safety by building trust between immigrant communities and local law enforcement.Mr. Sanders’s promise to increase immigrants’ access to the justice system, with more funding for courts and lawyers, stands in sharp contrast to the Republican view of unauthorized immigrants as a shadow society of criminals who haven’t been deported yet. Mr. Sanders instead sees them as parents, breadwinners, taxpayers, bulwarks of the economy and of the communities they live in, aspiring Americans trapped by unjust laws and oppressive policing.

Is that so radical? It may sound that way, in today’s climate. But it is a vision that lawmakers of both parties once embraced without question. Ronald Reagan and both Presidents Bush spoke movingly of immigrants as assets to the country to be welcomed through assimilation and citizenship.

Mr. Sanders has done more than most of the other candidates to seed the campaign with good ideas. But he is still trailing Hillary Rodham Clinton, whose own immigration agenda delivers a similar list of worthy proposals, but with fewer specifics and less breadth than that of Mr. Sanders. We hope she is inspired to match his boldness.

In this bizarre campaign season, Republican candidates are playing reality-TV versions of themselves, filling the air with lies and irrational promises, while the Democrats — Mr. Sanders especially — are depicted by TV comics as cranks and loons. Mr. Sanders’s immigration plan is a powerful counterpoint to that stereotype. It is reality-based, moderate, practical and hopeful.