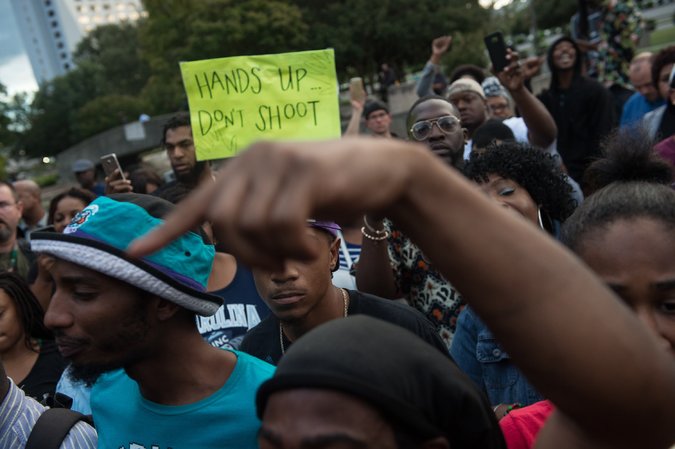 Speaking on the campaign trail in Pittsburgh on Thursday, Donald J. Trump offered a grave assessment: “Our country looks bad to the world, especially when we are supposed to be the world’s leader. How can we lead when we can’t even control our own cities?” Mr. Trump seems to want Americans to believe, as Representative Robert Pittenger, a Republican whose district includes areas in Charlotte, told the BBC, that black protesters in the city “hate white people because white people are successful and they’re not.”

On Thursday, I joined 50 Charlotte-area clergy members who were on the streets this week. Yes, a few dozen provocateurs did damage property and throw objects at the police, after being provoked by the officers’ tear gas, rubber bullets and military-style maneuvers. But as we saw, thousands more have peacefully demonstrated against the institutional violence in their communities.

That systemic violence, which rarely makes headlines, creates the daily traumatic stress that puts our communities on edge, affecting both those of us who live there and outside observers who often denounce “black-on-black” crime. We cannot have a grown-up conversation about race in America until we acknowledges the violent conditions engendered by government policy and police practice.

Anyone who is concerned about violence in Charlotte should note that no one declared a state of emergency when the city’s schools were resegregated, creating a school-to-prison pipeline for thousands of poor African-American children. Few voiced outrage over the damage caused when half a million North Carolinians were denied health insurance because the Legislature refused to expand Medicaid.

When Charlotte’s poor black neighborhoods were afflicted with disproportionate law enforcement during the war on drugs, condemning a whole generation to bad credit and a lack of job opportunities, our elected representatives didn’t call it violence. When immigration officers raid homes and snatch undocumented children from bus stops, they don’t call it violence. But all of these policies and practices do violence to the lives of thousands of Charlotte residents.

As a pastor and an organizer, I do not condone violent protest. But I must join the Charlotte demonstrators in condemning the systemic violence that threatened Mr. Scott’s body long before an officer decided to use lethal force against him. And I must condemn the militarization of Charlotte by the authorities who do not want to address the fundamental concerns of protesters. For black lives to matter in encounters with the police, they must also matter in public policy.

The North Carolina NAACP called for full transparency in the Scott case, including a Justice Department investigation. There are still many unanswered questions, which is why we demand that the governor release video from body cameras recording the shooting. And we want accountability for officers who did not have their body cameras on when they confronted Mr. Scott while he was waiting for his son to get off the school bus.

Our protests are about more than the Scott case. Every child on that bus — every person in Mr. Scott’s neighborhood — is subject to systemic violence every day, violence that will only increase if Mr. Trump and others continue to exploit the specter of violent protests for political gain.

We have seen this before. After the civil rights movement pushed this nation to face its institutionalized racism, we made significant efforts to address inequality through the war on poverty. We did not lose that war because we lacked resources or met insurmountable obstacles. We lost it because Richard M. Nixon’s “Southern strategy” played on white fears about black power by promising to “restore order” without addressing the root causes of unrest.

In the Scriptures, the prophet Jeremiah denounces false prophets for crying “peace, peace when there is no peace.” We cannot condemn the violence of a small minority of protesters without also condemning the overwhelming violence that millions suffer every day.

Instead, let’s look again at the vast, diverse majority of the protesters. This is what democracy looks like. We cannot let politicians use the protests as an excuse to back reactionary “law and order” measures. Instead, we must march and vote together for policies that will lift up the whole and ensure the justice that makes true peace possible.

William Barber II, president of the North Carolina N.A.A.C.P., is a founder of the “Moral Monday” movement and the author of “The Third Reconstruction.”