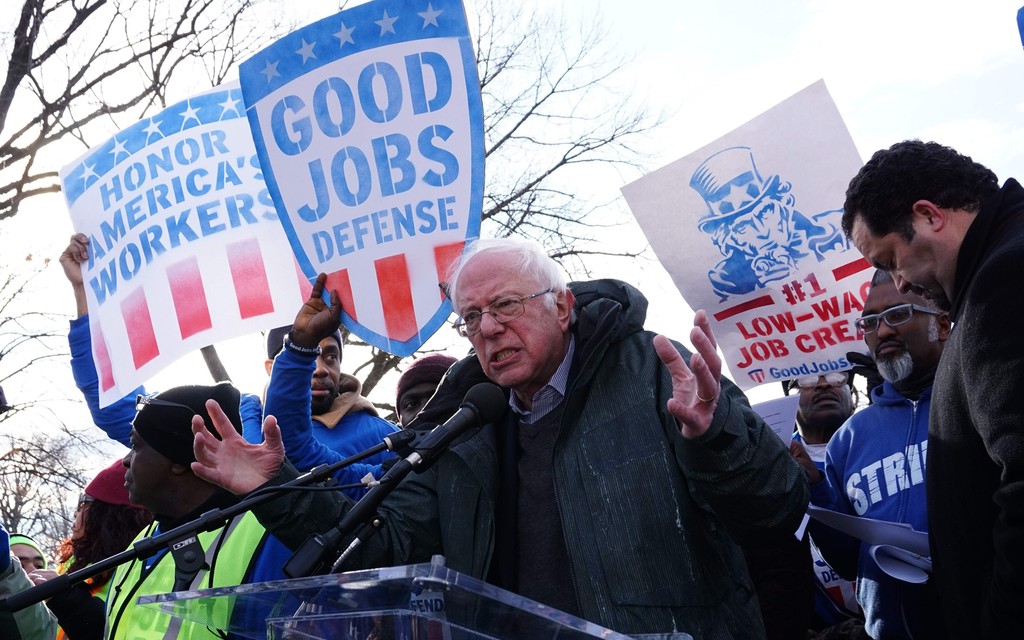 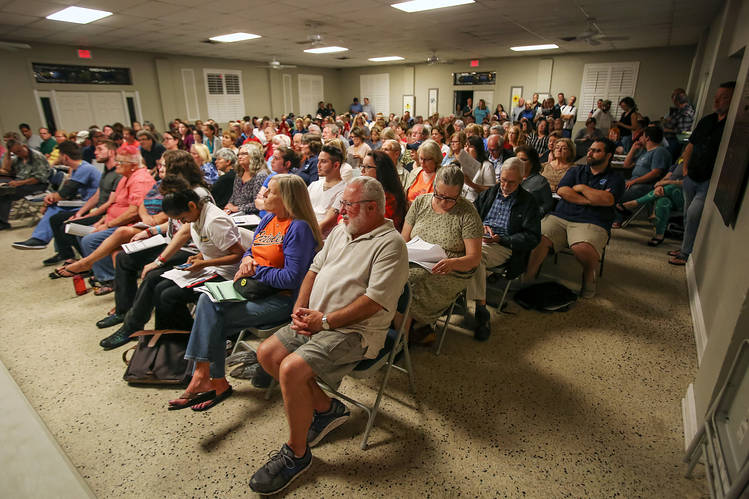 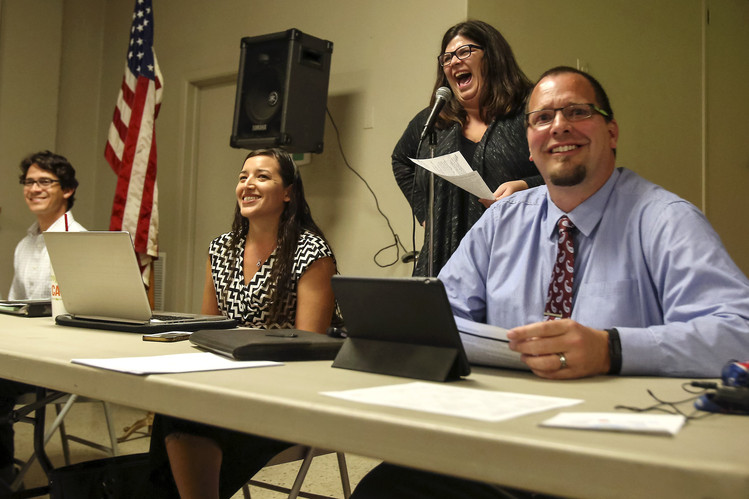 The broader goal is not only to pull the party to the left on policy, but also to fundamentally alter how it operates by eschewing corporate donors, shifting resources from television advertising to neighborhood organizing and stripping power from longtime party elders—including the “superdelegates” who can tip presidential primary contests—ahead of the 2020 election.

Mr. Sanders said the mobilization efforts are a legacy of his presidential campaign. “You have meetings where, in the old days, 20 people would show up. Now hundreds of people are showing up, in terms of competing for seats on Democratic state committees,” he said. “That is the goal—to bring more people into the political process.”

The primary vehicle is Our Revolution, which with its database of five million supporters has a trove of information about the left wing of the Democratic Party. Mr. Sanders and Our Revolution have no plans to share the list with the DNC, Mr. Cohen said.

The group taps a movement reminiscent of the tea party, which upturned the GOP establishment after Barack Obama’s election in 2008 sent Republicans to a historic defeat. Republican grass-roots insurgents toppled centrist GOP incumbents and forced others to adopt more conservative political positions to win their primary contests, in a running battle for control of the party that lasted years. 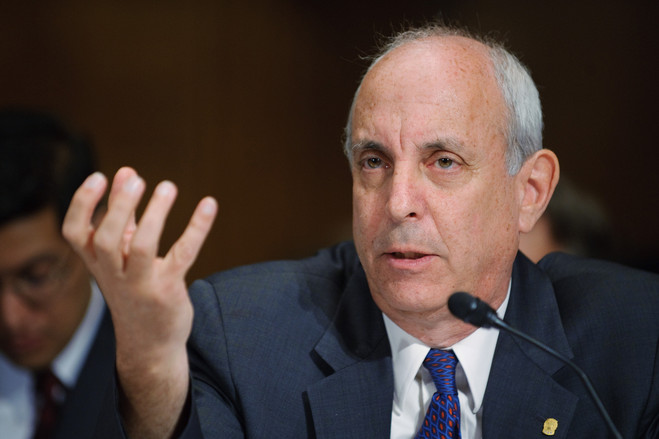 Larry Cohen, shown in 2011, is the board chairman of Our Revolution, the political organization that grew from the 2016 Sanders presidential campaign. Photo: AFP/Getty Images

Our Revolution’s top goals include making party officials and elected Democrats more accountable to activists, and replacing them if they aren’t.

The tool is a crowdsourced tracking system of officer elections and schedules of local Democratic Party meetings around the country. It collects information on events from state and county meetings to legislative and congressional district gatherings, which elect members of state central committees and delegates to state party conventions. The group’s goals aren’t subtle—the web address for the database is transformtheparty.com, and the default password for new users is bernie2020.

The system was built and is operated by Jon Culver, a 30-year-old web developer who worked for the Sanders presidential campaign from Seattle. Mr. Culver can text or email members of Mr. Sanders’ supporter list within a specific jurisdiction and urge them to attend meetings and vote for Our Revolution-backed candidates.

“This is a nationwide push to try and better understand and map out how the party works,” Mr. Culver said. “Before, people were reliant on local resources being good and up-to-date.”

The highest-profile test of the clout of the Sanders faction will come when DNC members gather this week in Atlanta to choose their next party chairman. Mr. Sanders, his supporters and Our Revolution are backing Minnesota Rep. Keith Ellison. Most of the party’s establishment, loyal to Mr. Obama and 2016 presidential nominee Hillary Clinton, support former Labor Secretary Tom Perez.

Whichever candidate prevails in Atlanta, he will preside over a party that is rapidly being populated by activists partial to the Sanders brand of liberal populism. “A lot of people are concerned that if Keith [Ellison] is not elected, there could be a backlash,” said Michelle Deatrick, a former Sanders campaign staffer from Michigan who last year won a seat on the DNC.

The Ellison organizing effort risks a backlash of its own. Pennsylvania Democratic Party Chairman Marcel Groen was annoyed recently when a group tweeted to urge followers to call him to show support for Mr. Ellison. More than 300 calls came in, jamming his line.

“They are putting an awful lot of pressure on people; it’s over the top,” said Mr. Groen, who subsequently endorsed Mr. Perez. “It’s counterproductive.”

In the Sacramento suburb of Elk Grove, more than 1,000 people showed up to stand in line outside a bowling alley in a torrential rainstorm to vote in the obscure party election. 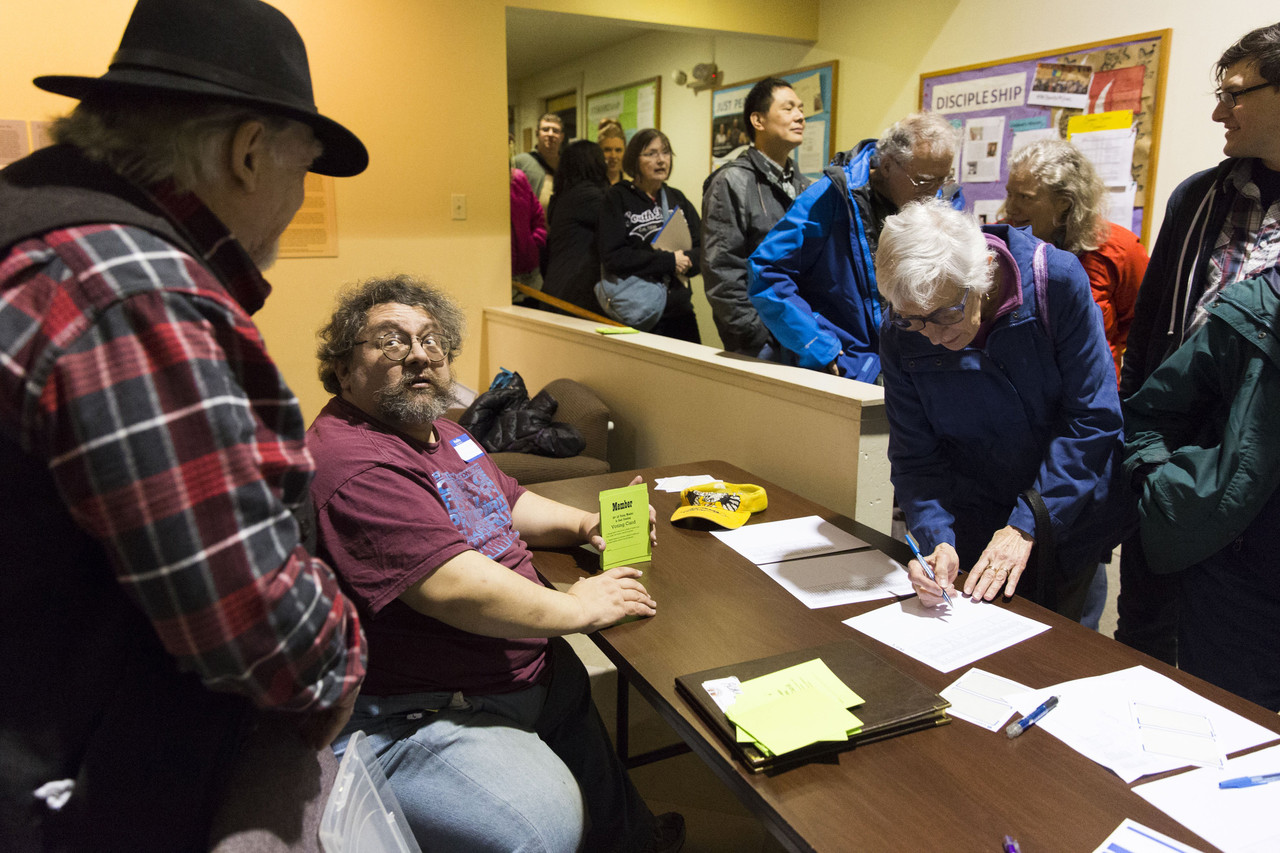 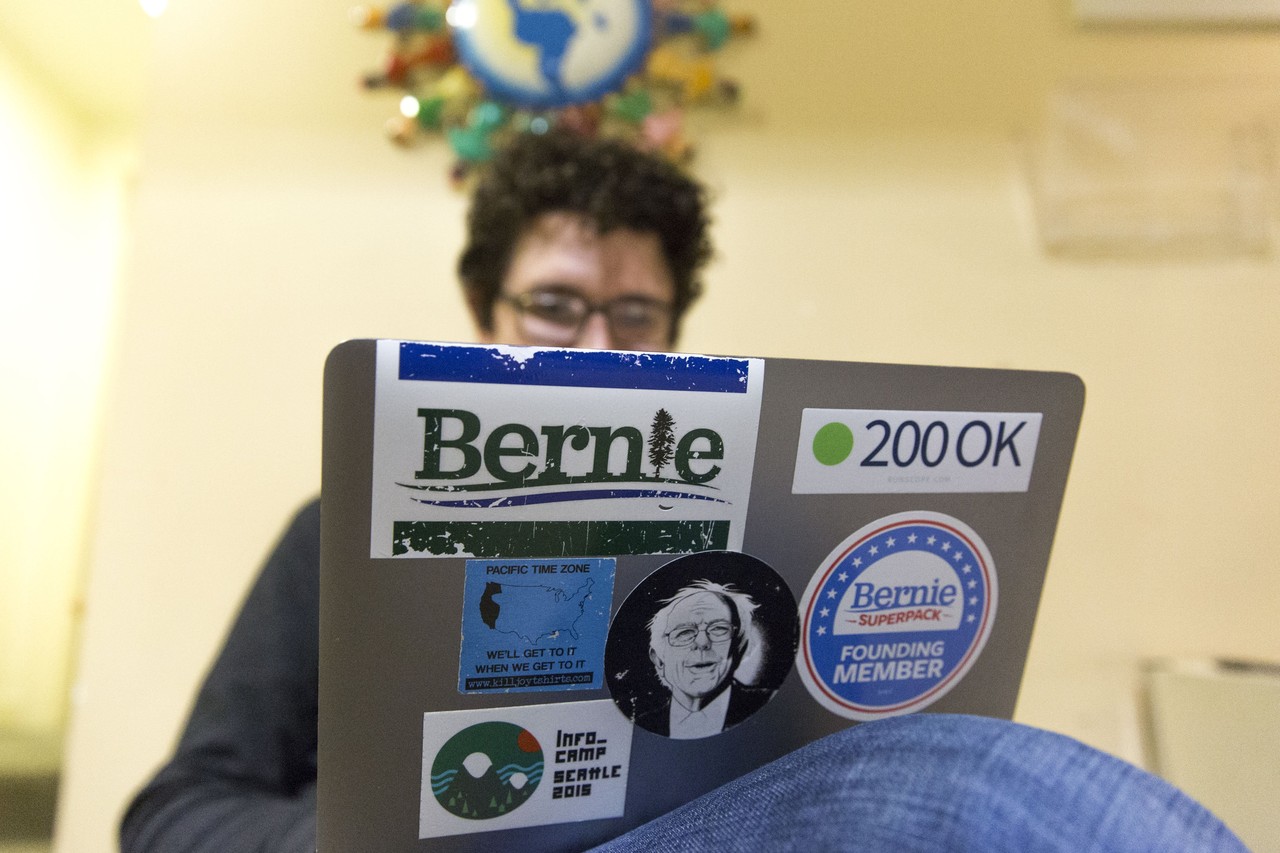 People arrive for a Democratic Party meeting at the Seattle Mennonite Church last week. Jon Culver, who built Our Revolution’s database, works on his laptop during the meeting. Photos: Jason Redmond for The Wall Street Journal(2)

Facing a slate of local establishment Democrats that included Elk Grove Mayor Steve Ly and his wife, the Our Revolution-backed team swept all 14 slots to the state convention. The feat was repeated across the state: Our Revolution’s candidates won more than 600 of 1,120 convention slots up for grabs in California in January.

Amar Shergill, an Elk Grove attorney, led the Our Revolution-backed slate. He has already begun pushing local Democrats to move to the left. When the local Democratic congressman, Ami Bera, held a town-hall meeting at Elk Grove city hall in late January, Mr. Shergill and others packed it to press him on a 2015 vote to restrict entry from Syrian refugees.

The chairman of the Los Angeles County Democratic Party since 2000, Mr. Bauman said his decision to back Mr. Ellison was influenced by the new wave of California activists. “The Democratic Party has to be a living and vibrant organization, and it has to re-image itself regularly,” he said.

Hawaii Democrats chose Tim Vandeveer, a Sanders delegate to last year’s convention, as party chairman last May. Jane Kleeb, an environmental activist who is a member of Our Revolution’s board of directors, became chairwoman of the Nebraska Democratic Party in December. Ms. Kleeb hasn’t been shy about chiding Democrats for not being sufficiently liberal. 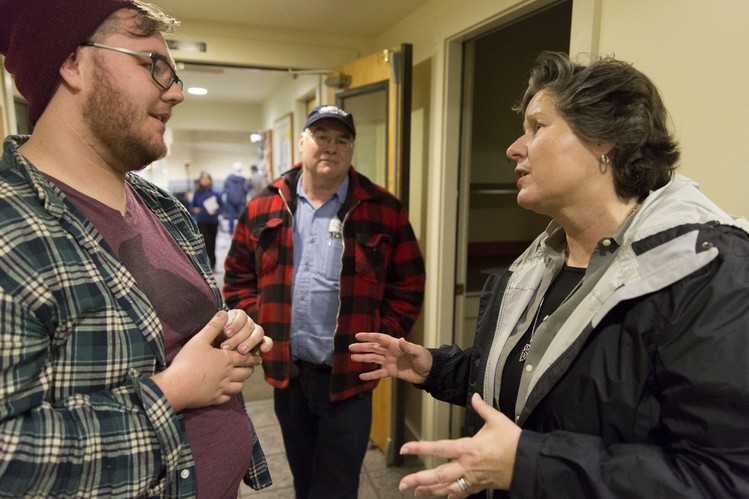 “We are here in the states and in the streets,” she said. “Trump and D.C. Dems do not seem to care.”

Mr. Culver built a website that described the positions and spelled out how to run. “It showed a runway of success when you can give people clear instructions of how to participate,” Mr. Culver said. “We can tell them where to show up and what’s relevant to them and they will deliver.”

In Florida’s Brevard County, a GOP stronghold Mr. Trump won by 20 percentage points, a few dozen Sanders-campaign alumni were surprised in December when they swept elections for the local Democratic Party officer positions.

“We didn’t know that 60 folks would be enough to take the majority,” said Stacey Patel, who got involved in politics organizing for the Sanders presidential campaign and was elected Brevard County’s Democratic Party chairwoman. 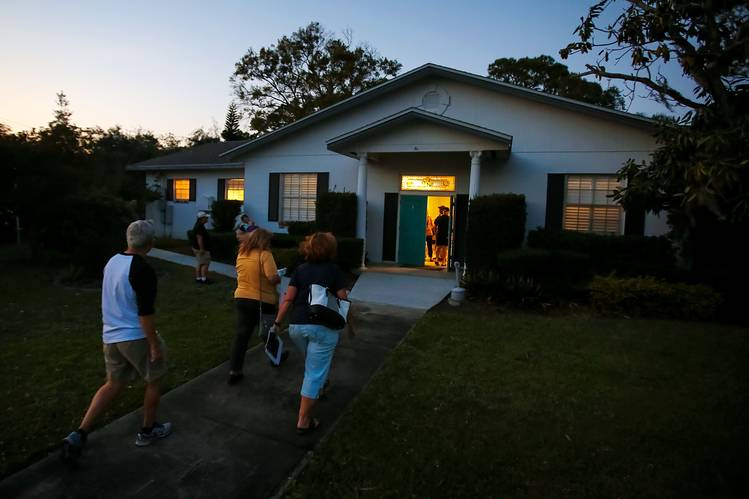 In Iowa, Our Revolution experienced resistance. It endorsed Blair Lawton, the Sanders campaign’s political director in the state, for its Democratic Party chairman race. But he couldn’t generate enough support to win, so the Sanders group shifted its allegiance to Derek Eadon, a top aide to Mr. Obama’s 2012 Iowa campaign.

In Michigan, a central battleground during both the 2016 presidential primary and general election, Democrats were rocked by ongoing divisions between the establishment and Sanders loyalists. Before the January filing deadline to attend Michigan’s state party convention, Our Revolution urged Michiganders on its email list to register to vote in the party’s election for chairman and state central committee.

Brandon Dillon, chairman of the Michigan Democratic Party, faced criticism from Sanders-campaign alumni. He consolidated his position by accommodating the left wing of the party in its platform and by endorsing Mr. Ellison for DNC chairman. Mr. Ellison returned the favor by endorsing his re-election as party leader.

But Sanders forces still got a bigger voice in the party: Ms. Deatrick was named to the DNC. At the state party convention Feb. 11, Sanders supporters won at least seven leadership posts within the state party, with more on the state central committee.

Write to Janet Hook at janet.hook@wsj.com