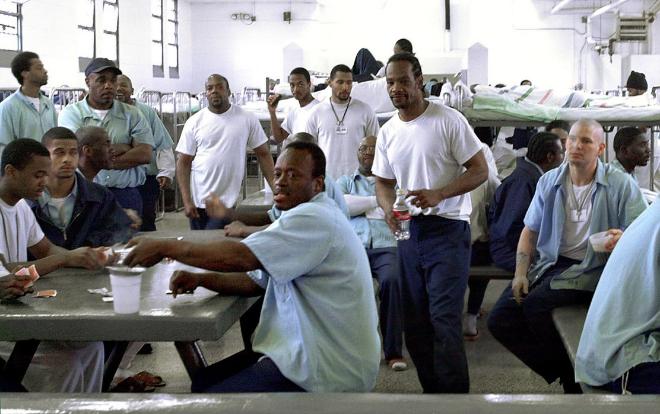 The national inmate count declined fractionally for a few years, reaping celebratory headlines. One expert quoted by the New York Times declared “the beginning of the end of mass incarceration.”

Then came the bipartisan miracle–the Koch brothers linking arms with libertarians and progressives to declare support for criminal justice reform, prompting dreamy talk about cutting prison rolls in half, to levels last seen before mandatory minimum madness began in the 1990s.

But as another legislative season toddles to a close, where are the broad reforms?

“Right now, the focus is still on reforming sentencing for nonviolent, first-time offenders,” says Nkechi Taifa [3], a senior policy analyst with the Open Society Foundations. “This the safe, low-hanging fruit of reform…And it’s like pulling hen’s teeth to even get that kind of legislation passed.”

How will the nation’s prison population decline significantly if there is no political will to reform hard-time sentences, including lifers?

In fact, Pew now projects [5] that state prison populations will increase by 3 percent over the next four years, begging the question of whether the heralded end of mass incarceration was dead on arrival as a political issue.

America’s growing lifer population is a quandary that pols choose to ignore.

“This population is treated as out of sight, out of mind,” says Ryan King [6], an Urban Institute senior fellow who tracks sentencing trends. “It’s like we don’t want to deal with the problem—and life-without-parolers (LWOPs) are the most extreme example.”

A sentence of life without parole has become popular (and more palatable to some jurors) as capital punishment has ebbed in many states. Some Americans find solace in the adage that there is just one way for an LWOP to leave prison: in a hearse.

Two years ago, Ashley Nellis of The Sentencing Project reported [7] that state and federal prisons held 160,000 lifers, nearly 50,000 of whom were LWOPs, with had no hope for parole.

Nellis revealed that even as prison populations declined marginally earlier this decade, the number of lifers was still climbing—up about 12 percent from 2008 to 2012, driven by voluminous mandatory minimum laws still on the books in states both red and blue.

In a sample of state inmate data, I found that the trend continues today.

There are stark racial elements in the data. About half of all lifers in the U.S. are black, and the figure approaches or exceeds 75 percent in some states, including Maryland, Georgia and Mississippi.

California has paroled about 2,000 of lifers in recent years as a result of shotgun reforms ordered by a federal judge to ease its appalling overcrowding. Its prisons held more than 40,000 lifers in 2012, about a quarter of the U.S. total, including about 4,600 LWOPs.

The California Legislative Analyst’s Office estimates that it costs $47,000 per year to incarcerate a criminal in that state. If those 4,600 LWOPs survive behind bars for an average of 35 years, it would cost California taxpayers about three-quarters of $1 billion.

And Human Rights Watch has reported [8] that the cost of caring for inmates accelerates steeply as they age.

But the depth of the mass incarceration problem goes beyond the semantics of a “life” sentence.

Texas has about 9,000 lifers, for example. But about one-third of its 150,000 prison inmates are serving sentences of 21 years or more, state data reveals. In Louisiana, the average state prison sentence stood at 21.9 years in January.

Nellis told me that she sees no movement toward reform for these hard-time prisoners.

“It’s still very politically appealing to say ‘life means life’ and that you’re going to be especially tough on people who commit violent crimes,” Nellis says. “It’s still very much a tool that policymakers use to show that they can be tougher than the last administration.”

The nominal sentencing reforms for low-level offenders considered in a number of statehouses this year expressly excluded relief for those now in prison.

As Alabama considered reform legislation in May, for example, the bill’s sponsor, Cam Ward, a Republican senator from the Birmingham suburbs, stated clearly the fundamental rule of this political ethos: “No one is getting released early.”

In Nebraska, the Unicameral approved a bill that offers alternatives to prison for nonviolent offenders, but it failed to support a more progressive bill that would have eliminated mandatory minimums for such things as drive-by shootings, the use of a firearm to commit a felony, and dealing crack cocaine, heroin and meth.

And in Louisiana, hell finally froze over for a cadre of persistent lawmakers who had tried for years to reform the state’s madly draconian marijuana laws, which allowed sentences of up to 20 years in prison for those convicted three times of possessing small amounts of weed.

The new law, which Gov. Bobby Jindal is expected to sign, reduces the maximum for third-offense possession of more than 14 grams of weed to eight years.

There were backslaps all around in Baton Rouge, where eight years in prison for behavior that has been legalized or decriminalized elsewhere in the country is viewed as big-deal reform.

FAMM Sees Cause for Optimism

FAMM’s Julie Stewart has spent 25 years lobbying for more rational sentencing. In an interview two years ago, she told me she was pessimistic that politicians would find the backbone to fix the problem.

Today, she says, “We’re far closer than ever to seeing some real reforms, particularly in Washington. The level of conversation about the problem is higher than it’s ever been.”

She cites several positive developments. The Maryland legislature last month reformed the state’s mandatory minimum drug sentences, and several other states are expected to do the same. In Washington, a handful of proposals could have an impact on prison populations, including the Smarter Sentencing Act [4], the Corrections Act [9] and an updated version of the Second Chance Act [10] of 2008.

The most progressive proposed federal legislation under consideration, the Justice Safety Valve Act, would allow federal judges to consider sentences below the mandatory minimums. It is stuck in a House committee.

“There are two pieces at work here—past sentencing and future sentencing,” says Stewart. “Right now we’re focused on future sentencing, but we also have to look at retroactive reforms for those in prison. The tub is full, and the faucet is still flowing at full capacity.”

The Urban Institute’s King says that while he sees no political imperative for retroactive relief for hard-timers, including violent offenders, the road to substantive reductions in mass incarceration leads there.

“To me, we’re not going to be able to see big reductions until we start talking about length-of-stay questions for lifers and these other people,” he told me. “We’re pushing this population to the margins and ignoring them, even though long sentences are not giving us a good return on investment.”

Taifa adds, “As a nation, we still do not have a level of comfort in dealing with these hard issues. But only when we do can we expect to affect real change in the prison population.”

Violent and repeat offenders have been warehoused in American prisons for so long now that we are ignorant about their potential for rehabilitation, the experts say.

“We know so little about this population,” King says. “People have an image of them…But there’s a lot of nuance to violent offenses. Not everyone in there is a multiple murderer.”