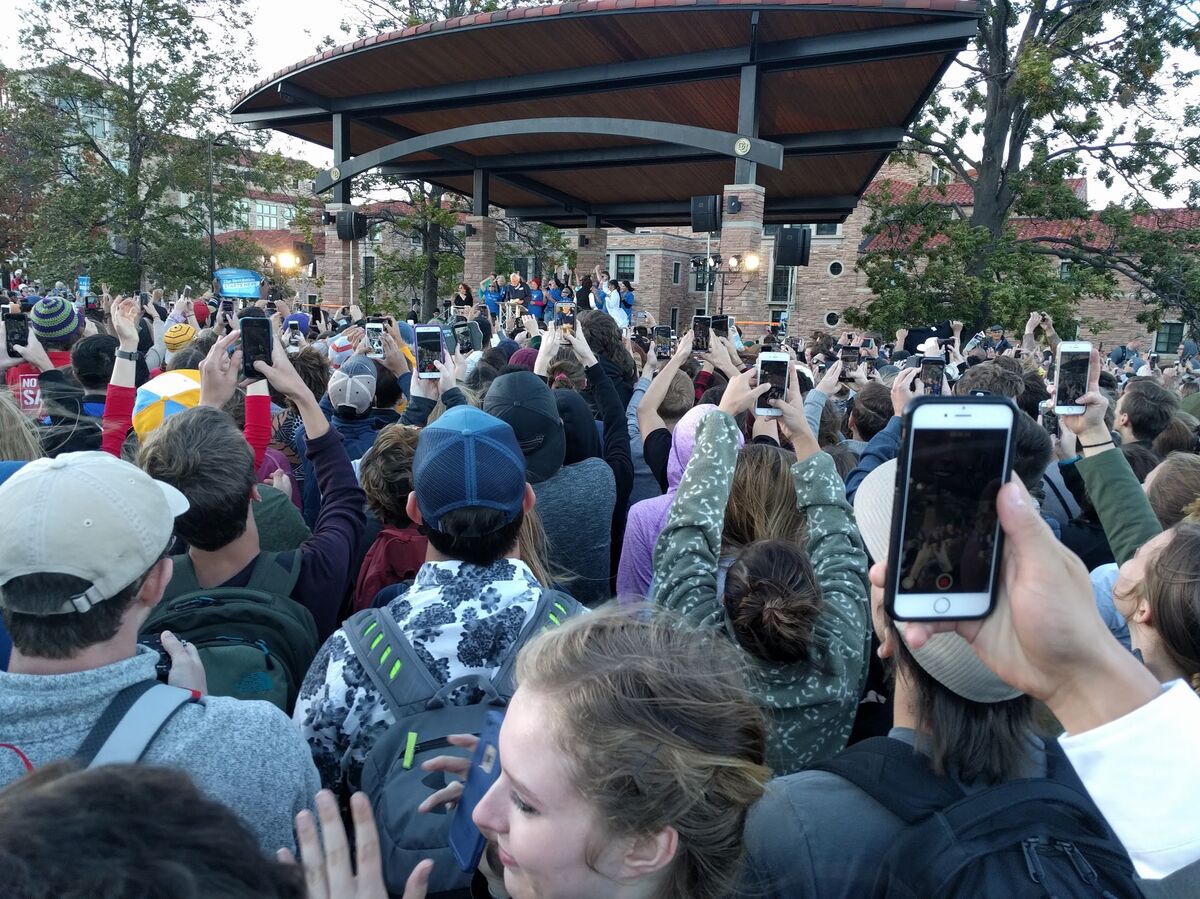 I asked State Representative Jonathan Singer, another Sanders supporter and delegate, why he and other backers of the Bernie revolution decided to throw their support behind Clinton instead of waiting four years and get another shot at the big prize.

“Well, do you burn the village to save the village?” he answered. “The Nazis’ opponents also wanted them to fail at governing so they could win the next election. But will there be a next time? Can we afford a Trump Supreme Court?”

Singer, who remains idealistic after 12 years in Colorado politics and two terms in the legislature, says he’s come to believe in U.S.-style coalition politics, in which alliances are made before elections, not after them as in Europe. In 2000, he voted for Ralph Nader and watched George W. Bush snatch victory away from Al Gore.

“I wish Nader had realized that he couldn’t win, come to Gore three days before the election and said, ‘I’ll tell my voters to vote for you if you do this on these three top issues,’” Singer says. “It could have turned out differently.”

Sanders did just that: He offered his support to Clinton in exchange for progressive changes to the Democratic platform and a tangible leftward shift in her program. If it weren’t for Sanders and his calls for free higher education, Clinton wouldn’t be talking about free community college; if it weren’t for his universal health care advocacy, she wouldn’t be pushing a public option in health care, a government-run coverage plan to compete with private insurers; if it weren’t for Bernie’s stringent opposition to the Trans-Pacific Partnership, she’d probably still be for it.

After the election, Sanders’s supporters are looking forward to seeing their guru ascend the ranks of Senate leaders, with far more influence than he had as a maverick throughout most of his career.

They also say their candidate’s success in their state has elevated their status with the Democratic Party hierarchy.

After the primary, Singer got a call from the Colorado Democratic Party, asking him to co-chair the state convention. “I wouldn’t have been standing in front of 5,000 people if it weren’t for Bernie Sanders,” he says. “Now the door is open a crack.”

Neither Ruscha nor Singer sees a future for the Sanders movement outside the Democratic Party: Both are in their 30s, and they predict that they and others like them will gradually take over the party. In Colorado, the millennial population is 28 percent of the total, the seventh biggest share among U.S. states, and Denver is one of the most millennial-dominated metropolitan areas in the U.S. Now that Sanders has galvanized the generation’s political activity, it may be a matter of a time before these voters start dictating the agenda and even the rules of politics.

“This is the last election of the two-party paradigm,” says Jill Hanauer, founder and president of Project New America, a Denver-based strategy and policy research company that works for a range of progressive and Democratic-leaning organizations. “Millennials don’t wake up thinking about ideological and party labels. It’s all about the issues that are important to them.”
Hanauer’s theory is that quality-of-life issues — from reproductive health to the environment — are going to be increasingly important, and a political candidate’s affiliation will matter less and less. That’s easy to imagine in Colorado, where more voters are registered as unaffiliated than as Democrats or Republicans. Rules, Hanauer says, may start changing to fit this evolving no-party landscape: Colorado, for example, may open its primaries to independents rather than just to registered voters, and different voting systems, such as ranked choice, may gain broader acceptance.

The idea of changing the system from within, however, carries the risk that the dreamers and revolutionaries will get used to compromise — the kind of baby steps Clinton is offering the Sanders base.

It would set up a nonprofit organization with all Colorado residents as members. The organization would collect 10 percent of all incomes to provide universal health coverage. ColoradoCare proponents say it would be as extensive as a current Platinum plan under Obamacare, covering 90 percent of medical costs without any deductibles. An elected board of 21 trustees would run the organization, deciding whether to ask for higher contributions if necessary, or expand or cut coverage.

If I lived in Colorado, Amendment 69 would get my vote, and not just because the required contribution, at about $532 per month on the median household income, is lower than two 40-year-old Colorado adults currently have to pay in Obamacare premiums for skimpier coverage.

Residents of Germany pay 14.6 percent of income to a “sickness fund” — a public organization like the one proposed by the Colorado amendment — to receive full coverage. The system is highly efficient, with short waiting times, tiny co-pays and high quality of care. Germany’s average life expectancy of 81 is two years higher than the U.S.’s.

In Colorado, though, there is major opposition to Amendment 69. The Denver Post called for a “resounding ‘No’” in an editorial that described ColoradoCare as a “government-run” system, which it is not, pointing to the trustees’ broad powers, saying the “tax” to finance it would be too high and warning against an experiment no other state has tried. At the rally in Boulder, Sanders raged against special interests — namely the insurance and pharmaceutical lobbies — spending “millions” to defeat the proposition.

In August, the independent Colorado Health Institute analyzed the program and concluded that it would run an increasing deficit from its inception. Although it would provide coverage to the 6.7 percent of Colorado residents who are currently uninsured, the institute said increased use of the universal program would eat up most of the savings from cutting out insurance companies and reducing paperwork, and ColoradoCare wouldn’t be able to catch up with growing health care costs.

The institute noted, though, that the ColoradoCare board could find ways to cut expenditures. “While our analysis does not contemplate large savings from reducing provider rates, reductions in compensation could significantly improve ColoradoCare’s bottom line,” the report said.

If ColoradoCare tried to drive a hard bargain, some doctors would probably leave the state, as opponents of the measure fear, but others would stay or even flock to it, attracted by the ease of doing business with a single payer, under a universal set of rules, rather than a host of insurance companies. This could significantly lower their overheads and increase the time they could actually work with patients.

Polls show, though, that Coloradans will probably reject Amendment 69 by a two-thirds majority. Even millennials will vote against it, albeit by a thinner margin.

“Good ideas don’t usually make it the first couple of times,” says Singer, who supports ColoradoCare. He was one of only two legislators who backed recreational marijuana legalization before it got on the popular ballot and was approved. The measure has been a fiscal success and it hasn’t led to increased out-migration or higher crime rates, as its opponents feared, so Singer believes a similarly bold experiment with health care will pay off.

I don’t quite share the optimism of Sanders supporters who have now flocked to Clinton: It’s hard to say how authentic her leftward shift is and how much of a backlash her easily reversible, cautious domestic policies may cause. Will her compromises teach those who have “felt the Bern” to settle for less and perhaps eventually for little change at all? I think they might. Then, the millennial-dominated “new American majority,” which Hanauer predicts will soon take over, won’t move quickly to resolve the problems that made this election year so ugly and divisive.

This column does not necessarily reflect the opinion of the editorial board or Bloomberg LP and its owners.

To contact the author of this story:
Leonid Bershidsky at lbershidsky@bloomberg.net