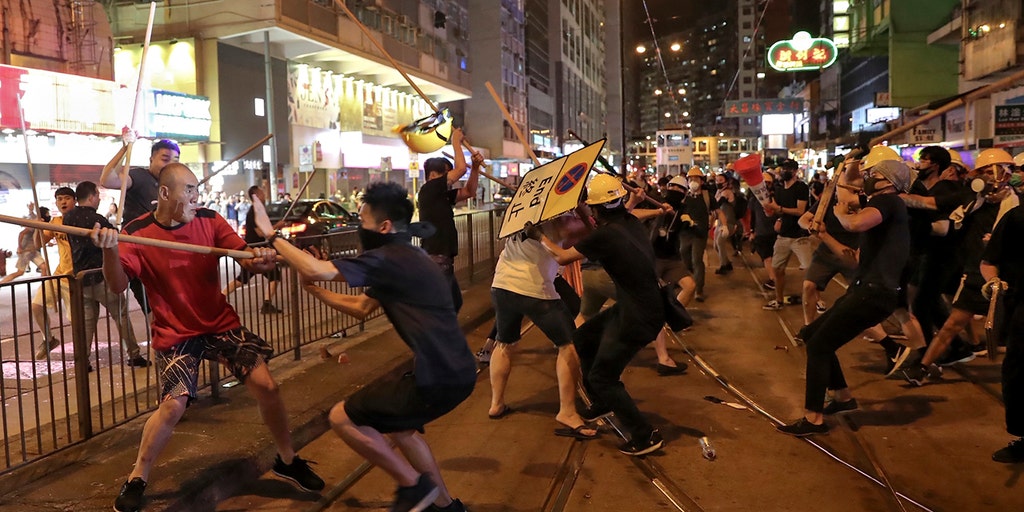 China warns Hong Kong protesters not to ‘play with fire’

o Hong Kong is capitalist; the People’s Republic of China is a country self-identified as in the primary stage of socialism with a Marxist-Leninist political system.  This is a major political contradiction and Hong Kong people are divided in their feelings about being part of China.

o Hong Kong Island was seized and colonized by Great Britain in 1842 as a result of the Opium War, Kowloon peninsula taken by the British later, and the adjacent New Territories leased for 100 years in 1897.  In 1997 sovereignty reverted back to China according to a joint agreement.  The handover stipulated a 50-year period in which Hong Kong would have a high degree of autonomy while China would control foreign relations and defense.  This agreement did not, however, resolve the political contradiction.  Having the character of a pragmatic, short term fix, the agreement is ambiguous as to what will happen to Hong Kong in 2047 when the arrangement ends.

o Hong Kong, long a British colony, has never had democracy.  Its political system is not fully democratic according to bourgeois standards, because the legislature and chief executive are not elected by one-person, one-vote.  Neither is there full democracy according to the Chinese socialist system, because there are no people’s congresses in civil society nor democratic centralism in a ruling communist party.  The hybrid system is a pragmatic patchwork; it is understandable that many people in Hong Kong want developed democratic institutions and that young people want more say in decision-making.

o The political forces and trends in Hong Kong are very complicated.  The protest movement consists of those seeking democratic reforms within the context of China’s policy of one-country, two systems; second, people who want an independent (capitalist) Hong Kong; third, a small group of anarchists and “thugs” initiating confrontation.  There are also counter-revolutionary “protesters” working with US imperialist agencies such as the National Endowment for Democracy, which for many years in Hong Kong has been actively promoting anti-communism and a color revolution in Beijing.

There are also many people in Hong Kong who support China for different reasons: patriotic feelings for China, commercial ties, those who sympathize with socialism.  More recent immigrants have strong family connections to China, rural villagers near the border vote pro- Beijing and the Hong Kong Federation of Trade Unions supports the government.  In addition to people of Hong Kong, transnational capitalists have considerable influence in different ways. China’s response can only be understood in the context of US imperialist strategy, which during the Trump administration has explicitly targeted China (and Russia) as principal adversaries.  US capitalism-imperialism wants regime change and friendly governments in those two countries.  The pivot to Asia initiated by President Obama and Hillary Clinton has surrounded China with military bases and alliances, including a major base in South Korea and support for revived Japanese militarism. Trump has initiated the trade war to pressure the Chinese economy.

China regards these policies as an extension of the colonial and imperialist efforts since the Opium War to break off parts of the country to weaken and subjugate it.

o Here is my take on the Five Demands currently put forward by the protest movement.

— First, the demand for direct elections for the legislature and chief executive will never be granted because China will not accept the possibility of the election of a pro-capitalist government committed to independence.  However, the Hong Kong government could engage in dialogue to expand democracy and engage young people short of conceding sovereignty.

— Another demand is for the resignation of Hong Kong chief executive Carrie Lam.  I don’t have an evaluation of how she is doing her job; she has kept a low profile and does not want to call in the military to restore order.  It’s possible she could resign.

— Another demand is to permanently withdraw the extradition bill, which has been shelved for the time being.  This seems unreasonable to me because almost every country has extradition laws.  A better plan would be to propose a further revision of the bill.  The original extradition issue has been lost; a young woman in Taiwan was murdered and the alleged perpetrator fled to Hong Kong and is now arrested and in a Hong Kong jail.  Taiwan wants the person sent back to stand trial; the original extradition law was an attempt to fulfill this request.  Protesters oppose the bill because it could be used in the future to extradite people in Hong Kong to China; they say this could lead to political repression.  It could also be used to extradite people to China who flee to Hong Kong to escape the major anti-corruption campaign.

— Meanwhile, the government has demanded foreign governments (i.e. USA) cease interference.  CIA etc. involvement in the protest movement could also be investigated. In general, my view is that the Hong Kong government could be more flexible on initiating dialogue and compromise — they do hold state power.  However, it is understandable that the Hong Kong and Chinese governments regard sovereignty as non-negotiable; Hong Kong may have autonomy but not independence.

What is the role of the US Left?

— The US media has mostly an anti-China bias, petitions and rallies supporting the Hong Kong government are barely mentioned.  The Left should strive to understand all sides of the story for a balanced perspective.

— The people of Hong Kong and China are the ones to resolve the problems and issues.

— The role of the US Left is to call for an end to US militarism and intervention in all forms.  We want a policy of peace and friendly relations with China, not tension and conflict.  The US should cooperate with China on climate change and other issues.  The US should bring the troops home, make deep cuts in the military budget and increase support for social programs. Cease using Hong Kong as a base promoting a ‘color revolution’ and regime change.

— It is urgently hoped that matters will be resolved through peaceful dialogue and not violence.

The author wishes to thank the Massachusetts Committees of Correspondence for Democracy and Socialism for its input; he is also the coordinator of the China Study Group at the Center for Marxist Education in Cambridge.

Chinese President Xi Jinping delivers a keynote speech at the opening ceremony of the Belt and Road Forum for International Cooperation in Beijing, capital of China, May 14, 2017. [Photo/Xinhua]
By Caleb T. Maupin
China.org.cn

May 16, 2017 – The biggest and most important international gathering of 2017 has taken place in Beijing. Over 100 countries were represented. 1,500 people attended, including various heads of state, the United Nations Secretary-General, the leaders of the International Monetary Fund, as well as some of the most well known and respected scientists and engineers.

The Belt and Road Forum for International Cooperation (BRF) was not a place of ideological podium pounding. The gathering of world leaders from all different backgrounds had only one real theme: Progress.

The forum did not discuss the merits of philosophers. Rather, it discussed the construction of high speed trains, power plants, highways, hospitals, airports and schools. The forum made specific plans for the China-led initiative of bringing impoverished countries into a more prosperous state of being, with infrastructure and investment in public services.

Over 100 countries and 50 intergovernmental agencies are on board with this New Silk Road initiative. Investment in the project has increased by 36 percent in 2016, with over 126 billion US dollars being spent. High speed rail is connecting the countries of Southeast Asia. Bangladesh has signed agreements for over 25 projects. An airport is being built in Nepal, along with a hydro-electrical power plant, and railway.

The China-Pakistan Economic Corridor is bringing new hope to millions, as are the railway lines providing ocean access to landlocked regions in Central Asia. This is just to name a few of the hundreds of projects launched in the last four years.

It is those poorest corners of the world, the sections of the planet most affected by drug cartels, terrorism, extreme poverty, illiteracy, and lack of access to medical care and gainful employment, that so far have been the focus of the project. Africa, Asia, Latin America, and Eastern Europe are filled with hope as cooperation in the project offers access to a better life for millions of people.

At the center of it all is the Asian Infrastructure Investment Bank, an institution devoted to sustainable development and providing an opportunity to historically impoverished countries.

It should be deeply reflected upon as to why the head of the state of U.S. was noticeably absent from this historic gathering while the heads of state of China, Russia, and Turkey spoke at the opening ceremony, along with the UN Secretary-General. Comments from some high ranking U.S. leaders view the project with cynicism, and present it as some kind of sinister plot to ensure Chinese world domination. At a Senate hearing in Washington last Thursday, the U.S. Director of National Intelligence Daniel Coats said, "The Chinese have a strategy. You name a part of the world, they are investing in it."

Some U.S. leaders have referred to the New Silk Road as China’s Marshal Plan. However, unlike the Marshall Plan, the New Silk Road has no political stipulations. While the United States required Marshall Plan countries to be anti-communist and partisan in the Cold War, China makes no such demands on participating countries. In his remarks to the forum Chinese President Xi Jinping stated, "We have no intention to intervene in the affairs of other countries or to export our social system." (Continued)

END_OF_DOCUMENT_TOKEN_TO_BE_REPLACED

China opposes alliance with any other 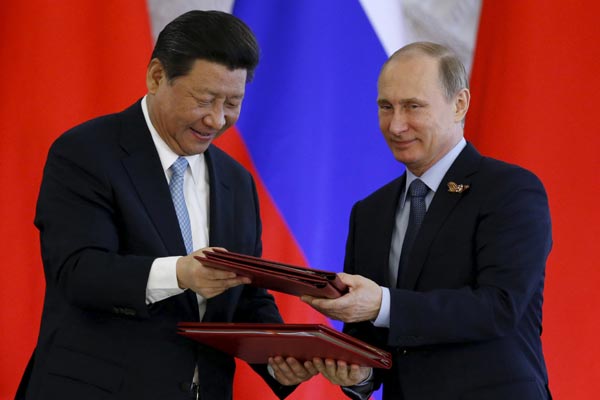 Russia’s President Vladimir Putin (R) and China’s President Xi Jinping attend a documents signing ceremony during their meeting at the Kremlin in Moscow, Russia, May 8, 2015. [Photo/Agencies]

To say China and Russia are forging a new ideological bloc is simply absurd. The term "ideology" is misleading. What does it mean? No country in the world likes outside interference in its internal affairs, ideology or no ideology.

International law prescribes the principle of non-interference in the internal affairs of another country. And one of the cardinal principles of China’s foreign policy is: No alliance with any other country.

The first "yes" is yes to peace. China has taken a huge undertaking to modernize itself. Peace is the sine qua non for development. The second is yes to development. China faces many problems and believes only development can help solve them. The third is yes to cooperation. China is aware that in a globalized world, no country can modernize itself in isolation. International cooperation is indispensable, and it is because of global cooperation over the past 36 years that China has achieved miraculous economic growth.

President Xi Jinping has been reiterating that China will stick to its peaceful development strategy, and it has no reason to deviate. True, over the past few years, cooperation between China and Russia has deepened on the basis of mutual benefit. But that is because the Chinese and Russian economies are highly complementary. China is a resource-poor country, while Russia is a resource-rich country, and they need each other.

The trade volume between China and Russia reached $95 billion last year, making up about 2 percent of China’s foreign trade. So, there is ample room for further development. Bu China is ready to build cooperation with other countries, too, on the basis of equality and mutual benefit. In this context, the growth of the China-US relationship is a case in point, as their trade volume reached $540 billion last year.

On the Ukraine crisis, China’s consistent position has been that the sovereignty and territorial integrity of every country in the world should be respected. China believes the Ukraine crisis cannot be solved through military means and urges all relevant parties to seek a solution through diplomatic channels.