Oct 13, 2016 – WASHINGTON — Twenty-two more US House lawmakers are calling on President Barack Obama to adopt a policy of no-first-use of nuclear weapons, part of a tide of Democratic lawmakers pushing for restraint on atomic arms as the sun sets on the current administration.

With relations between Washington and Moscow historically tense and unpredictable this week, the lawmakers in a letter to Obama on Thursday expressed worry over the two nations’ launch-under-attack postures and “the risk of catastrophic miscalculation and full-scale nuclear war.”

“As you know, were the United States to exercise its contingency plans to use nuclear weapons first in a conflict against a nuclear-armed adversary, a full-scale nuclear exchange could ensue, killing thousands of civilians,” the letter reads. “For the security and safety of the world, military options that can spiral towards mutually assured destruction should not be on the table.”

Thursday’s letter was led by Rep. Barbara Lee, D-Calif., the Peace and Security Task Force chair for the Congressional Progressive Caucus. Another signatory was Rep. Keith Ellison, D-Minn. Ellison is the caucus’ co-chair and his party’s chief deputy whip in the House.

A no-first-use policy would minimize the need for "first strike” weapons, they argue in the letter, including the next-generation nuclear-armed cruise missile and intercontinental ballistic missiles, "which could generate significant cost savings and lead other nuclear-armed states to make similar calculations."

END_OF_DOCUMENT_TOKEN_TO_BE_REPLACED March 10, 2015 – Yesterday the White House took a new step toward the theater of the absurd by “declaring a national emergency with respect to the unusual and extraordinary threat to the national security and foreign policy of the United States posed by the situation in Venezuela,” as President Barack Obama put it in a letter to House Speaker John Boehner.

It remains to be seen whether anyone in the White House press corps will have the courage to ask what in the world the nation’s chief executive could mean by that. Is Venezuela financing a coming terrorist attack on U.S. territory? Planning an invasion? Building a nuclear weapon?

Who do they think they are kidding? Some may say that the language is just there because it is necessary under U.S. law in order to impose the latest round of sanctions on Venezuela. That is not much of a defense, telling the whole world the rule of law in the United States is something the president can use lies to get around whenever he finds it inconvenient.

That was the approach of President Ronald Reagan in 1985 when he made a similar declaration in order to impose sanctions — including an economic embargo — on Nicaragua. Like the White House today, he was trying to topple an elected government that Washington didn’t like. He was able to use paramilitary and terrorist violence as well as an embargo in a successful effort to destroy the Nicaraguan economy and ultimately overturn its government. (The Sandinistas eventually returned to power in 2007 and are the governing party today.)

The world has moved forward, even though Washington has not. Venezuela today has very strong backing from its neighbors against what almost every government in the region sees as an attempt to destabilize the country.

“The Community of Latin American and Caribbean States (CELAC) reiterates its strong repudiation of the application of unilateral coercive measures that are contrary to international law,” read a statement from every country in the hemisphere except for the U.S. and Canada on Feb. 11. They were responding to the U.S. sanctions against Venezuela that Obama signed into law in December.

Didn’t read any of this in the English-language media? Well, you probably also didn’t see the immediate reaction to yesterday’s White House blunder from the head of the Union of South American Nations, which read, “UNASUR rejects any external or internal attempt at interference that seeks to disrupt the democratic process in Venezuela.” (Continued)

END_OF_DOCUMENT_TOKEN_TO_BE_REPLACED 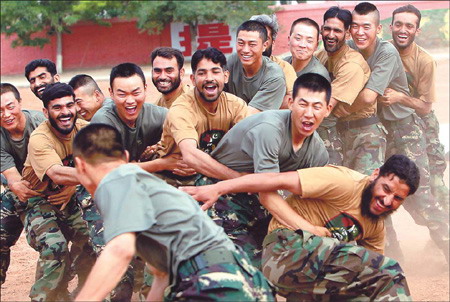 BEIJING, Feb. 18 — U.S. President Barack Obama is set to host the "Summit on Countering Violent Extremism" in Washington on Wednesday in an attempt to address the aggravating terrorist violence across the world.

This summit will be attended by security experts and government officials from member countries of the U.S.-led anti-terrorism coalition against the backdrop of recent terrorist attacks in Europe, the Middle East and Africa.

Since the Sept. 11 attacks in 2001, the United States has actively spearheaded the international fight against terrorism.

In the name of counter-terrorism, the George W. Bush administration launched two successive wars in Afghanistan and Iraq, which, instead of stemming terrorism, have bred waves of terrorist activities and violence that have claimed tens of thousands of innocent lives.

Over the past 13 years, terrorist activities continue to rise worldwide. The Islamic State (IS) and other emerging terrorist groups pose new challenges to the global fight against terrorism, and their birth was partly related to the U.S. Middle East policy.

Last year, on the eve of the 13th anniversary of the Sept. 11 attacks, Obama set out his strategy to unite with other countries for military actions against the IS in a televised address to the American public.

"America will lead a broad coalition to roll back this terrorist threat," Obama declared. "Our objective is clear: we will degrade, and ultimately destroy IS through a comprehensive and sustained counter-terrorism strategy."

Compared to Bush’s coalition, the "new anti-terror coalition" proposed by Obama appears to be more extensive, as it has to date involved more than 60 countries and regional organizations, some of which have taken an active part in the airstrikes against the IS.

But this coalition is not inclusive enough as Russia, Iran, Syria and other countries, which are capable of contributing to the fight against the IS, are excluded.  (Continued)