Albeit far from its intentions, the Trump administration has put the idea of sanctuaries on steroids — spaces free from the threat of raids and deportations. As immigrant workers, unions and their allies look for creative ways to counter anti-immigrant onslaughts, they’re adopting the sanctuary framework to deal with the dangers faced on the job. Pittsburgh is poised for growth for the first time in 60 years. Will the city’s African-American community grow with it?

It used to be that community activists, politicians and developers would fight over allowing the gentrification of city neighborhoods. If you eliminated affordable housing and replaced it with housing that was not as affordable, most people agreed it was at least the start of gentrification.

These days, the battle is apparently a little more nuanced.

The study claims gentrification is “obviously not the case in East Liberty” because all new market-rate development happened on vacant land, and because neighborhood demographics from 2010 to 2013 remained the same.

“The [report authors] certainly knew the story they wanted to tell and chose to ‘back up’ that story with the facts that happen to support it,” wrote Ivey, who documented the demolition of an East Liberty housing project in 2006, in an email to City Paper.

Ivey notes there has been a demographic shift in East Liberty since 2000, with the numbers of blacks declining three times as fast as whites, according to U.S. Census data. Census data also indicate that the northern tract of East Liberty lost hundreds of African-American residents since 2000, and that the median black income there went up 14 percent as a result — or, as Ivey puts it “poor blacks moved out.”

Another statistic foregone by the study was homeownership. According to statistics compiled by Pittsburgh Community Reinvestment Group (PCRG), from 2011 to 2014, East Liberty saw 55 homes purchased by whites, while only three homes were bought by blacks.

So while some may argue whether what’s gone on in East Liberty and other city communities is gentrification, one fact is uncontroverted: African Americans are leaving some of their long-time Pittsburgh neighborhoods in droves because they can no longer afford to live there, and that urban flight could get worse before it gets better.

With thousands of residential units slated for development, the city is seemingly poised for growth for the first time more than 50 years. But will Pittsburgh’s black population grow with it?

END_OF_DOCUMENT_TOKEN_TO_BE_REPLACED 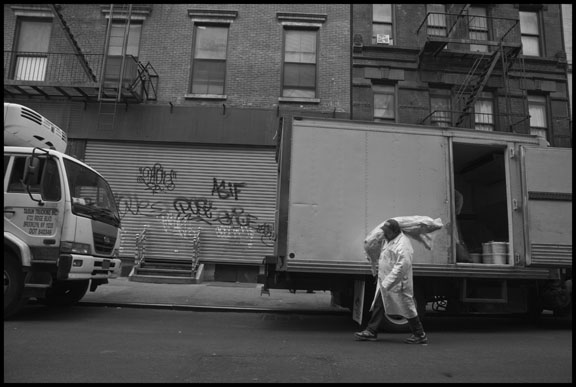 Click on the photo to go to the entire essay

From Chinatown to midtown, Manhattan is part of a city that works, and also that doesn’t work. That is, it’s full of working people, but not everyone has a job. Some people work on the street, while others live and sleep on it. New York is not like the suburbs, or cities built around malls and cars. Everything and anything can happen in the streets here.